Serial communication between computers and/or microcontrollers allows messages to be sent using a single wire. The message takes the form of a series of voltage pulses that encode a sequence of zeros and ones. There are two main protocols for serial communication, TTL and RS232. The major difference between the two is the voltages that encode the bits. TTL encodes zeros with a voltage of zero and ones with a voltage of 5 V (or 3.3 V). To increase data integrity, RS232 encodes zeros as +3 V and ones as -3 V. 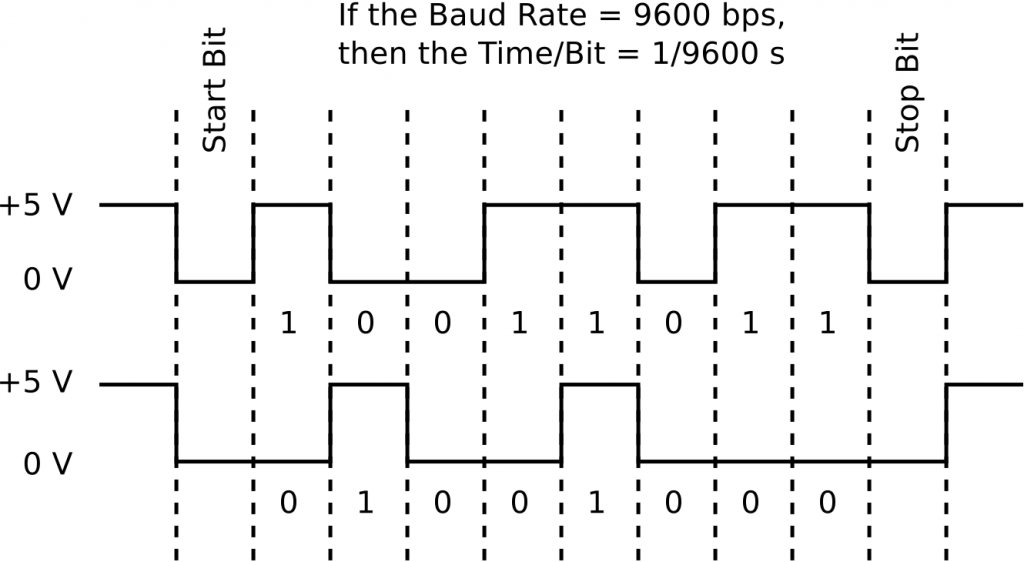 To establish a serial connection between two devices, the devices must share knowledge of the baud rate at which the transmission of data will occur (this is the number of bits per second (bps) being transmitted), the number of data bits in each “chunk” of data, the number (and value) of start and stop bits that will indicate the beginning and end of each “chunk” of data, and the presence (or absence) of a parity bit for error checking. The devices must also know whether the data stream being sent has the least significant digit or most significant digit first.

The figure above is an example of what an actual Arduino TTL serial signal would look like if it was monitored using an oscilloscope. Because the LSB is sent first, the numbers being sent are 11011001 (top) and 00010010 (bottom).

Previous Post: A Scientific Number Picker to Maximize Your Chances of Winning the Powerball Jackpot
Next Post: An Arduino Calculator