A bipolar junction transistor (either PNP or NPN type) can be used as an analog amplifier or as a digital switch. These days, it is probably much simpler to use an operational amplifier to achieve amplification of analog signals instead of building an amplifier using individual transistors but there are many situations where using a transistor as a switch may be useful. I give an example at the bottom of this post. 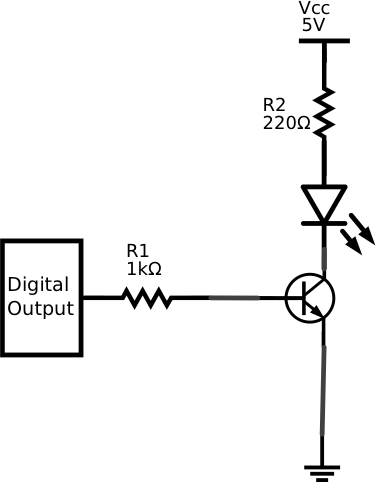 You may wonder why you would use a transistor at all to switch the LED. Well, an LED doesn’t draw much current but if you are switching a device that draws more current then the MCU may not be able to provide it but the transistor connected directly to a battery will be able to supply it.

Why would you want to use a transistor to switch a small current load like an LED? Suppose you only want the LED to light up if two separate things occur. Then you can replace the Vcc in the schematic above with another digital pin on your MCU. Then your LED will only turn on if both digital pins are set high. This is like a rudimentary AND gate.